I want to talk about this 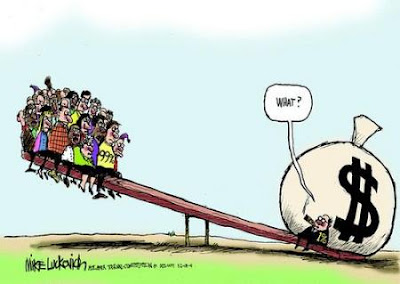 and NOT about this (even if it should be more appropriate, for an academic but I am not an academic :-)

The aforementioned figures are:

NOTE: USD stands for United States dollars. Typically these figures are given in a currency that is widely used in the world to let economists make comparison among different countries, without being bored with currency rate conversions. The US dollar is by far the most used currency in the world.

Typically the average income is reported by Italian, French and Dutch press: it is simple to understand, you take a bunch of people, sum up their incomes, and divide the result by the population. Easy.

So, you can see that the average is hiding a huge difference of income in the population. Most of the people are earning 20000, not 21800, which is almost 10% more!
Let's make another example, and suppose that there are ninety people earning 20000, 9 earning  200000 (ie ten times more than the majority) and a lucky guy earning 2000000 (2 million, 100 times more than the majority). Total population is still 100 people.
The average income becomes

That is, according to statistics, the average salary is 56 thousand, that is 1800 % more than the majority.

Now you start to grasp the surface: in a society where there is an important different among the incomes of the population, talking about the average is meaningless.

NOTE: if this has triggered your curiosity, then have a glance at a very simple yet teasing post that I wrote on the Pareto's principle applied nowadays.

There might be an increase of wealth (see GDP, the ubiquitous Gross Domestic Product), yet this improvement goes only to the richest. The average GDP per capita, that is GDP divided by the population, can't see this. Maybe the majority got poorer but according to statistics on average we are all richer.

Is there a better metric to be used? First of all you have to understand that journalists (and policymakers) typically have a humanistic background, ie they cannot sum up 2 plus 2, they simplify complex things to the extreme, and in Italy they are even proud of being ignorant in mathematics.
And mathematicians, physicists and engineers are proud to claim themselves ignorant in economics. They are scientists, and do not want to be bored with this stuff like stocks, GDP, interest rates, that pertain to human creation and not to the laws of Mother Nature.
So, it is difficult to get from mainstream media this information. You have to use internet.

In any case, the good news is that a better metric does exist, and is called median.

You simply sort the incomes from the lowest to the highest, and pick up the value in the middle, which is called the median of the population.
So, in our first example (99 guys earning 20K, and one guy earning 200K), the median is 20K, because you put in a row all the people according to the salary, but it turns out that the fiftieth guy still earns 20K. So the median is 20K.

I remind you that for the newspapers, reporting the average, the income would have been 56K, while a vast majority (80% of the people) only get 20K per year!

This is a first dip into the magician sea of statistics, ie how I can screw you over whenever I need to.

So, I am going to give you an advice: if you want to see how a country has been performing since 1971 (when Bretton Woods system collapsed and inequality started increasing) look especially at median per capita figures. You are not interested in the overall wealth of a country, you are interested first in the wealth per family (is it increasing?) , and especially if the difference between average salary and median salary is increasing over time: this means that the middle class is shrinking.